SVEC vets are experts at discovering and correcting breathing issues

Tie-Backs (Standing or Lay down)

Recently, SVEC has adopted and refined the standing tie-back surgical technique in sedated horses. This technique was originally developed at Cornell University in draft horses, as the risk of undergoing general anesthesia is a significant issue in horses of that weight range. We discovered that this was a much more precise way to adjust the arytenoid cartilage, because the larynx is in a natural position and not compressed by external tissues. Furthermore, there is no tube in the airway to interfere with the veterinarian’s assessment of the arytenoid’s position. As such, we have a procedure that is easier on the horse, is performed in a shorter time, and leads to a better outcome. A skilled operating team of talented anesthesia and surgical technicians is essential to the procedure’s success. After the last stitch or staple is placed in the skin, the horse simply walks back to his stall.
Historically, surgeons have corrected laryngeal hemiplegia in horses with a procedure called tie-back surgery under general anesthesia in lateral recumbency (lying on their right side). The surgeon performs a laryngoplasty, placing one or two very strong sutures between the muscular process of the arytenoid cartilage and the cricoid cartilage (the ring of cartilage around the trachea). The sutures are in place, the horse is considered to be “tied back”—hence, the name of the surgery.

SVEC uses a transendoscopic laser-assisted technique in the standing sedated horse to perform a Ventriculocordectomy (Cordectomy). This procedure is vocal cord removal, which is used to treat respiratory noise caused by vocal cord collapse. The procedure creates a smoother laryngeal contour, which reduces respiratory noise. We are often using this in conjunction with the standing tie-back to optimize noise reduction and exercise stamina.

Experimental data has suggested that a longer time period (two to three months) may be required before the maximal effects are achieved in terms of reduction of respiratory noise and obstruction.

Dorsal displacement of the soft palate (DDSP) is a performance-limiting condition of the upper respiratory tract which occurs during fast exercise when the soft palate moves above the epiglottis (part of the larynx), creating a functional obstruction within the airway. This restricts airflow to the lungs and causes a sudden loss of performance and often a choking or gurgling noise.
The Tie-Forward Surgery is performed through a sterile surgical incision on the underside of the throat. The aim of the surgery is to advance the larynx (voice box) forward, so it sits over the soft palate, forcing it to stay in the correct position. The voice box is held in position by permanent sutures. In addition to the sterile surgery, transendoscopic laser-assisted cautery of the soft palate can be performed via the mouth, causing the soft palate to scar and tighten. Recent studies have found tie-forward surgery to have an 80% success of reducing or eliminating Dorsal Displacement of the Soft Palate. 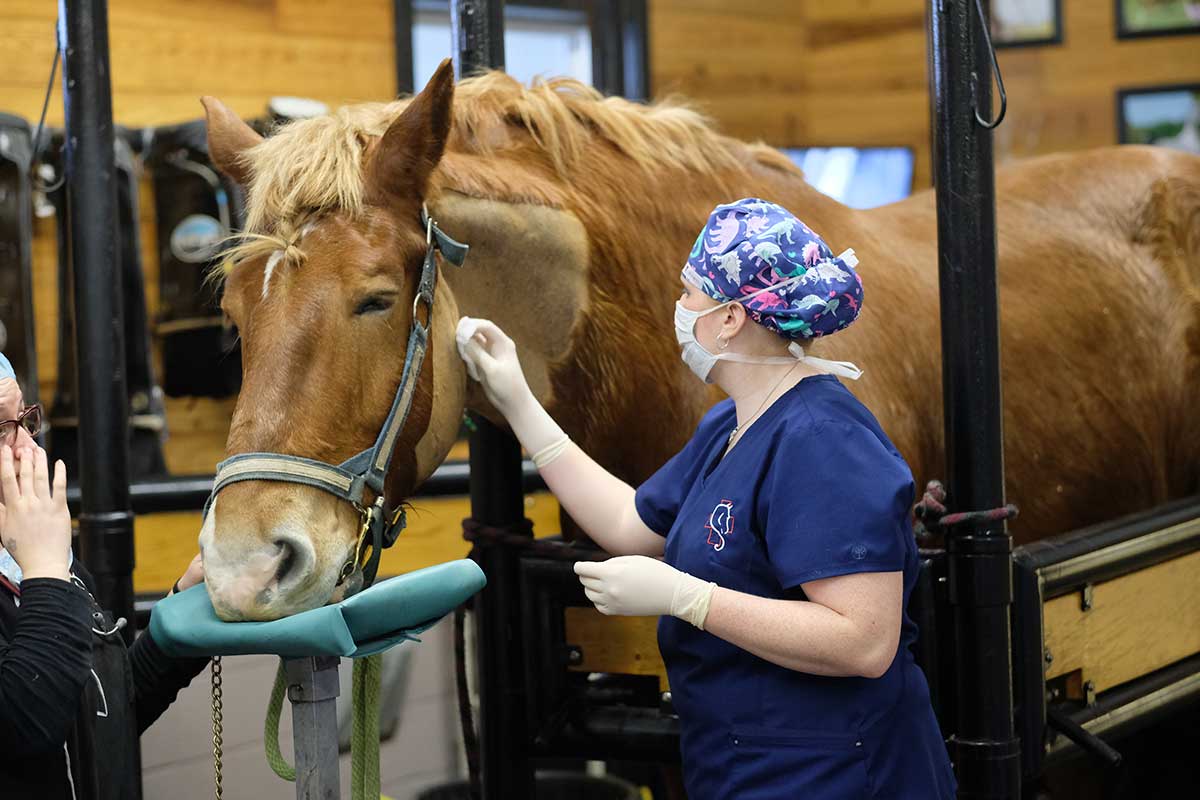 Every advantage, every step of the way.

State of the art surgical services.

Proactive Health Care for your horse.